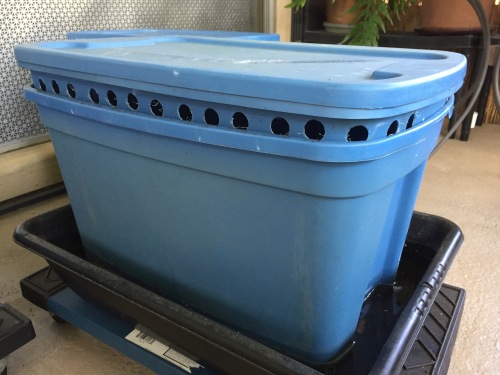 Update 5, bin 1.  Amazing progress.  There are worms everywhere in that bin.  I thought they would be concentrated in the thicker soil under all the food waste I’ve been feeding.   What a surprise to find then in numbers under the decaying grass introduced last week.  They all look healthy.  The roly poly are also doing well I could see many smaller ones running around in there indicating reproduction.  They might overrun the bin.  If they do I let them loose on my yard compost pile.  It is an experiment.

When I lifted part of a mango I found another unidentified insect alongside the worms.  Was able to get a close up on video.  It looked like something I’ve seen when pulling bark off a rotting tree.  Maybe I’ll be able to figure out what it is.  Guessing it was in the soil that the worms were in when I introduced them to the bin.

Can’t remember if I was going to start putting waste on the thinner soil side this soon.  After seeing the number of worms under the grass I will.  Start building it up.  Couldn’t be more fascinated by this bin and it’s progression.   The distribution and number of worms, rapidly reproducing roly polys and a new species.  Added strawberries, sprayed a good rain to keep the moisture up seemed a little dry in there.  The hard part at this point is knowing how much waste to put in without creating a stinking mess.  Don’t want to over do it.  -13