Bins 2 & 3, Update 12.  This one starts without notes.  The footage was filmed during the WordPress whiteout mayhem.  There are several times where the worms are at the top of the bin on the ledge/lip that the lid sits on.  Also in the recess created by the molded in handhold.

The photo above is bin two, from the 16th, when they were bunched up in the recess.  Scooped them out with a flattened plant stem and dropped them back in the bin.  Still hadn’t thought of the fermenting possibility at that point and left the mango like it was.  The photo below shows why.  There is a mess of activity on the salad with the mango close by.

It doesn’t look like there is much going on near the mango.  In the video it doesn’t look like any insects are going near it.  Didn’t catch that detail when taking a few quick photos of the progress.  Might not matter.  The video of bin three shows them all around the mangos at the same time.  Days later on the 18th it looks like they’re passing by. 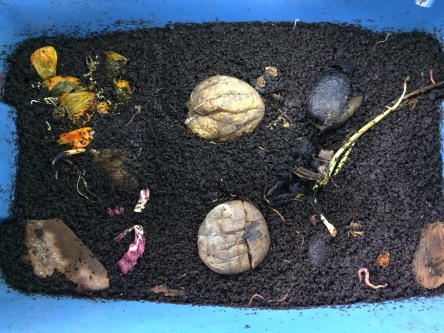 Not sure what that means if anything.  I’m still thinking they’re avoiding the fermenting gasses while the mango were in that state.  I’ll be paying much more attention in the future.  Will also wait longer before putting in fruits so I can pull the skin off by hand or chop them up.  Won’t be putting whole fruits in like that again.

The other stuff looks good, no unwanted insects or reptiles.  No fermenting or other smells.  Added some Florida avocados to both bins on the 18th.  There are plenty of veg scraps I’ll get in tomorrow for a check-up and add it then.  -13