Once again another DF-LCS (Defensor Fortis Load Carrying System) modification.  This time it’s for the elastic that connects the rear section to the two front sections.  After using the DF-LCS I was unhappy with the unused space created by the elastic connection and wanted a solution.  I had a surplus fighting load carrier (FLC) on hand when it dawned on me to break it down into individual components and reuse the parts to fill the space. 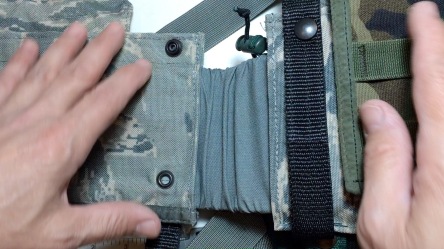 The PALS (pouch attachment ladder system) panels on the FLC would be perfect with little modification necessary.  Once they were removed from the rest of the assembly it would be easy to cut the parts to size, sew on the recycled edge binding, then sew the free ends together.  This would allow them to slip over the elastic connector then be laced to the front and rear section of PALS webbing with military spec paracord.

The idea works well for the ALICE M-16 pouches I converted to MOLLE.  So far those have performed as expected when the ALICE magazine pouches are fully loaded with gear.  I did have to tighten the lace up to eliminate the slight sagging issue.

Rear view of ALICE magazine pouch and PALS panel on a DF-LCS.

I don’t have a lot of detail here because it’s in the video.  The video moves from FLC disassembly, to layout, then sewing and finally how to make it work with the LCS.  Video below.  -13