I can hardly believe the numbers.  I’ve been messing around over at YouTube getting things in order over there, trying to understand things better and clicked on the wrong button.  It went to the first page of my videos.  When I was checking out the views on the videos listed I couldn’t believe how many views my compost sifter had.  It’s really exciting to see that there are many people interested in composting and possibliy organic gardening.  Really hope my video inspires and lifts people up.  -13 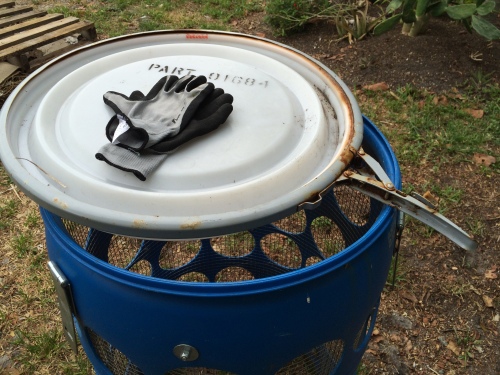 After the marathon style cut and paste the other night I noticed that I never wrote much about my experience and had only made a video.   So, now I’m feeling kind of motivated so here it goes.  I’m into organic gardening, that requires compost, lots of it if you’re into producing a large amount of food for canning/storage purposes.  I found a great local source for horse manure, fresh, steaming, shoulder-level piles of it.  Moving 5 pick-up truck loads of horse manure by hand and wheel barrow will make you feel healthy.  That’s moving all the organic material more than three times.  Once at the point of collection, back at the homestead into the compost pile and then again before it gets used.  One shovel and wheel barrow at a time.

A little sore after all that an individual needs a way to sift all the unwanted trash and unprocessed organic material so it doesn’t end up in your garden-of-plenty.  Being on the low budget, do-it-yourself kind of mindset I decided to check out YouTube for some inspiration.  Lucky me I found it.  I cannot remember what I searched for but do remember the first video I watched on a homemade compost sifter made by Desert Garden Prepper with a Harbor Freight cement mixer.  It was so creative the way the parts were machined and reconfigured into a compost sifter.  Completely motivated by that I couldn’t wait to make my own.

I wanted to make one like Desert Garden Prepper had made but don’t have the tools or knowledge to weld.  That made me look at other mixers.  I remembered one I had seen a Lowes store and when I looked it up online the instant I saw it the crazy idea came into my head that one of those blue barrels would fit onto the end of the mixer.  I felt like I knew it would just fit.  Imagine how shocked and surprised I was when it fit so well.  I almost couldn’t believe it but it was right in front of me so I had no choice. 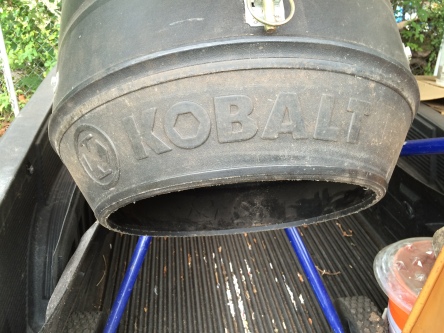 Since the barrel and mixer fit together so well without modification it made it easy to mount it in place with simple lock hasp and lynch pins.  Okay that gets the barrel to the mixer and it turns.  That leaves the barrel and how/what to do with the waste and out-feed.

The barrel was a little bit of work.  It came with a ring lid which is what I wanted so I could have a factory formed edge meet with the mixer.  On the out feed part of the barrel, the bottom, I used a jig saw to cut just inside the rim.  That removed the bottom.  Next I had to make a way for the material to pass through and be sifted.  This involved using a 5″ circle template I printed off my computer to mark the circle cutouts in no particular order.  I tried to space them as evenly as possible to retain as much structural integrity and strength as possible.  After marking the holes I drilled pilot holes then used a jig saw to cut out the circles.

Once the circles were complete I lined the inside with 1/2″ hardware cloth and bolted it in with stainless steel bolts and locking nuts.  At first I was going to make two, one for 1/4″ and one for the 1/2″.  After lining the barrel I realized that all I had to do to make this barrel sift smaller material was to just put the smaller size cloth inside the barrel with the 1/2″ cloth and use bolts and wingnuts to hold it in place.  A real easy and quick change over requiring much less storage space than two or more barrels.  Most everything goes through the 1/2″ screen anyway so a change over is rare.

The other part of the sifter is where will the waste go and how will I move it.  To solve that I had the barrel set at an angle to dump waste into a wheelbarrow.  The barrel rest on two casters affixed to a scrap of pallet spring clamped onto the wheelbarrow with a cardboard scrap underneath it to keep out processed compost.  The spring clamps seem to provide enough holding power yet will give away if there is any real stress applied.  I’m hoping that if there is some type of problem it will pop apart and not damage anything.  On one end of the pallet scrap I have a hole drilled to hold one of those green garden stakes sold at local nursery’s.  That holds a piece of cardboard which acts as a deflector to keep the unprocessed materials out of the processed materials.

I noticed when first using this sifter that the materials were passing through so that not all or even most of the material was getting sifted.  To solve that I decreased the angle of the out flow to reduce the speed at which the material reached the out feed end of the barrel.  So far everything seems to be working well because I’ve put much more through it that the original 5 manure loads.   After watching several videos on YouTube I do not think this would be good for sorting worms.  I believe the weight of the organic material would slam down on top of them and cause trauma to the worms every turn they made.  Just my opinion though.

I really like how it works, the portability I can process every where I can plug into electricity, plus it’s either an organic material processer or a cement/soil mixer.  It will be interesting to see how long it last and how good the idea was over time. -13

Here is it the first video made for my YouTube channel. It was inspired by what I had seen Desert Garden Prepper had made. -13